From Zak
(Redirected from Damage: The Sadistic Butchering of Humanity)
Jump to: navigation, search

Suomi-Peli’s most famous game Damage: The Sadistic Butchering of Humanity was published for Amiga in 1996. In the beginning it was only available via mail order directly from the developers, but from 1998 it started being distributed by British Crystal Software & Electronics.[2][3] Damage was later released for free distribution and Suomi-Peli is developing an improved version of the game.[4]

The development of Damage

Suomi-Peli started developing Damage in 1993.[5] The game’s makers all come from a small Finnish town where everyone who was interested in similar things knew each other. Olli-Pertti Kojo had animated violent stick figure animations on Atari ST, and Jyrki Sinivaara and Jani Finér had been developing a war game that had been influenced by Dogs of War and Walker.[6]

The makers tell AmigaPd website’s interview that the idea for Damage started from the thought that in many war games it’s acceptable to kill innocent civilians and that they’d create a game where the war is on the streets and it would be so violent and brutal that no publisher would ever want to publish it.[6] In Blue and White Game Book Sinivaara gives an alternative explanation: Shooting civilians is punishable in many other games, but in Damage the player earns points for these kills and that there are many characters in the game that have no other reason for existence other than to die. They wanted to make a game that no one else would dare make.[7]

Coding was made by Jyrki Sinivaara, graphics by Jani Finér and Olli-Pertti Kojo, and music by Jani Finér.[2] The making of Damage turned out to be a massive project. The makers were ambitious and they weren’t fully aware of what would be needed to carry out the plans.[5] The development was also slowed down by Sinivaara’s job and Finér and Kojo’s studies as well as the mandatory military service they had to do in the middle. The game was being made in the evenings and weekends.[8] The guys didn’t give up but they wanted to make the game as best as possible.[5]

Before it was released, Damage was shown at the annual Assembly event.[8] Also, in February 1996 CU Amiga magazine’s Alan Dykes described the game’s demo with the following:[9]

Frankly Damage is sick, and after a while running around murdering people it loses its morbid fascination. Graphically this preview version is nothing to speak about and the only gameplay feature is the competition over the amount people you can kill. The full version promises more depth, but apart from shock value I'm not convinced.

At the end of 1996 Damage: The Sadistic Butchering of Humanity was published for Amiga as two disks that came with a map and a leaflet.[5][2] It was available as mail order from the developers themselves and it cost 50 Finnish Marks or 15 US dollars. If you paid 100 Marks or more, the buyer could get a silver Special Edition that came with a signed certificate verifying the originality of the game.[8]

Suomi-Peli made a deal with Crystal Software & Electronics in 1998 for them to start distributing the game.[3] Only a few hundred copies were ever sold but the feedback from the gamers was very positive. The true sales figures are anyone’s guess as later on the makers figured they’d been cheated by professional businessmen.[6] At one point a Dutch distributor turned out to be cheating as they claimed no copies of the game were ever sold.[7]

Despite the violence, the media didn’t pick Damage apart, and the makers wondered if it was a good thing that Damage hadn’t gotten more popular. The game’s players were a marginal niche group and welcome the game with positive reviews.[6]

Jimmy Westerberg wrote in Swedish AmigaInfo magazine (6/1997) that Damage was one of the most entertaining games that he’s ever played:[10]

The graphics are very small but very detailed. The music and sound effects are perfect, and the quality is high. The game play is there, and it will never go away. Damage is one of the most entertaining games I have ever played. Who said computer games weren't causing violence?

So why am I playing this game? Because it's <gulp> fun. Damage is tricky that way; it's very stylish and very playable. The tiny animations — cops edging along with raised pistols, little old ladies with walkers, businessmen with briefcases, blood flying from all of them — are delicate.

In Damage: The Sadistic Butchering of Humanity the player has to find the best route to the president and kill as many people along the way as possible. As the name suggests, the goal is to massacre the humanity by launching atomic missiles around the world after you find the launch button. Damage is a violent adventure game that’s viewed from the side, and it shouldn’t be taken too seriously.

The story starts from when the president’s perfect son Michael Modelcitizen disappears. As a young man, he’d already won Olympic Gold in many sports, received the Nobel Peace Prize, was the most popular movie and rock star, and he was also married to Miss Universe. Even though he had everything a man could wish for, Mike was very bored. He wanted more than anyone could offer him. One day he disappears and after searching for him for 4 years, he’s declared dead.[13]

The player controls Mike Massacre, who wakes up in the crazy scientist’s test chamber with amnesia and having no knowledge of where he is, who he is, or what he should do. His restlessness grows and he suddenly realizes what the meaning of his and other people’s lives are. The player takes the scientist’s baseball bat and accompanied by heavy metal, leaves to kill humanity, which he’s realized is his goal.[13]

The player’s first victim is a professor who can be found immersed in his project at the start of the game. Superhuman program gets aborted when the player hits the professor’s head off with a baseball bat. Before leaving the player takes the doctor’s wallet from his pocket and looks at a piece of paper by the crucifix that reads “on vacation.” The world’s now left to its own devices. 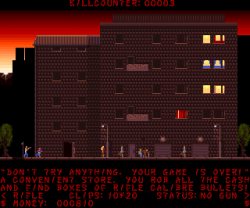 Upon being released to the streets the police start demanding for the player to surrender. You need better weapons than a baseball bat and those can be found by taking them from dead victims or by buying them from the store. For the player to obtain money he needs to steal, and to steal money the player needs to kill his victims. The city is full of innocent civilians whose killings will easily increase the kill count that’s displayed on the top of the screen. As the number goes up, soldiers rush to help the police and survival will get much tougher in the city.

The city is fairly large and there was a map that came with the original game that would help with navigation. Graphics are small but they’re well animated and full of details. In the middle of shooting, the fact that the player can bend like an acrobat helps a lot; He can jump and roll to avoid bullets. The game also offers intravenous drugs to help the player keep going, and they all affect you differently. If everything is going really bad, you can also always commit suicide with a needle.

Suomi-Peli started developing an improved version of Damage for the PC in 2001, and around the same time the Amiga version was released for free distribution. The Windows game was never finished and the only thing remaining is a screenshot.[10]

Almost ten years later Suomi-Peli returned to developing the PC version and the first demo that showed the game’s mechanics was released for Windows in March 2011.[14] The game was mainly developed by Jyrki Sinivaara and Jani Finér, but they also got consulting help from Olli-Pertti Kojo.[6] Sinivaara established Suomi-Peli Osakeyhtiö (Suomi-Peli Oy) in the summer of 2012[1] and in May the next year Damage: Sadistic Butchering of Humanity, Episode I was published.

Episode I included only a small part of the original city in the Amiga version and it also lacked other features of the original game. The makers were developing the game in their free time and they wanted to release a more compact version of the game to see if there was enough interest for them to keep developing it.[15] To support the developers the player could register the game and pay €9.95 to get access to drugs and to delete the censored sign.[16]

Suomi-Peli finished online registration on 1st of January 2015 as the laws around country-related sales tax changed.[17] Damage was available to be voted on Steam Greenlight since 6th January.[18] The game passed Greenlight and has been available on Steam Early Access since December 2016.[19]