From Zak
(Redirected from MikroBITTI)
Jump to: navigation, search 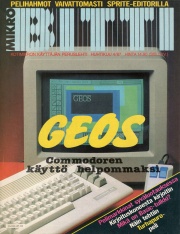 MikroBitti was established in 1984. It was designed to be a domestic specialty magazine for the microcomputer buffs. The magazine published all kinds of material, including guides on how to build computers, program listings, gadget tests, and articles about computer culture. Games were also an important part of MikroBitti. The magazine harbored a sense of community by publishing games written by amateurs as program listings, and for many it was the only way to get their game published.

There were many different kinds of microcomputers at the beginning of the 1980s, and the magazine’s main bases became ZX Spectrum and Commodore 64. In 1987, MikroBitti established a sister magazine called C=lehti for the users of Commodore 64 and Amiga. In 1992, C=lehti merged with an annual publication called Pelit, and together they became the magazine also called Pelit. MikroBitti changed their topic area and interests in 2004 to include any new technology. These days the magazine is known as MB.