From Zak
(Redirected from Misfit)
Jump to: navigation, search

Calling himself “punk rock coder”, Mika "Misfit" Keränen has been creating games as a hobby for a long time. His first experience with programming was when he created a kind of a text adventure game on a VIC-20 as a child. In 1998, his war strategy game IsoWiha got to the finals of Discover competition.

In November 2015, British company Cronosoft published Misfit’s Super Starship Space Attack on a cassette.[3] An isometric adventure Pentagorat was published on a cassette for the Commodore VIC-20 in December 2016.[4] 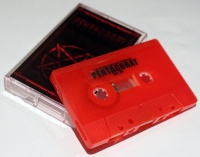