From Zak
(Redirected from VecSports Boxing)
Jump to: navigation, search

Manu Pärssinen is known for websites Pelikonepeijoonit and V2.fi, and his most well known game is VecSports Boxing that he made for the Vectrex game console. The game was published by Good Deal Games in 2002.[2][3]

Pärssinen started programming on Vectrex in 2000. He took part in the second Alternative Party, and after seeing the demos for other old machines he wished that the next year they could also be seen on Vectrex. He didn’t have any experience of assembler but decided to take on the challenge after his friend Marq suggested that he learn it independently. Marq himself had too many things going on at the same time.[4] 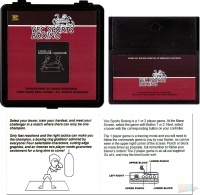 VecSports Boxing is Pärssinen’s only game that was published in a physical format (excluding collection cassettes). He has also developed other games, demos and mixed training programs for Vectrex. His unfinished games are known as Manu’s Incomplete Games Volume 1-5[6] and can be found for example on the compilation called Vectrex 72 Game Multicart.[7]

Pärssinen started learning how to program on Vectrex after the Alternative Party and created a website for the purpose where he’d jot down his progress.[8][9] He published his first training program on the 11th of July 2000, and it contained an outline of Pikachu. By the end of July Pärssinen had come up with two game ideas, Battle Earth Terror Hazard and VecSports Boxing, which he published as a package called Vexperience. On top of that, Pärssinen had been adding things that he’d learned together, and entered the Vammala Party demo competition with his Vectrex Demo, placing third overall.[10]

Pärssinen continued working on his boxing game in August 2000, and took it apart from Vexperience and made it a game in its own right. After his Vimpula experiment he took a year-and-a-half-long break from programming, only publishing a short training program during that time in which he brought "All your base are belong to us" scene from Zero Wing game to Vectrex. On top of that, Pärssinen had made a mix of everything he’s learned so far and brought it to the third Alternative Party.[9]

Pärssinen continued programming for Vectrex in February 2002. He finished his side project 0ldsk00l demo and concentrated on working on his boxing game. VecSports Boxing was ready to be launched on May 15, 2002.[9]

In VecSports Boxing, the player controls a boxer who must follow his trainer’s guidance. The boxer is in front of a punching bag and a series of commands will appear on the top right hand corner of the screen, which the player must follow or otherwise the game will reset to the beginning. When there are two players, they will compete against each other and whoever wins two rounds will win the game. If the game ends in a tie, the winner will be decided with rock-paper-scissors game.

Illustration of VecSports Boxing without color overlay, and with the overlay that comes with the Limited Edition.

A limited 13-copy edition of the game was made, which included a cartridge made by Mark Shaker, as well as a cardboard box made by Pärssinen, a color overlay, and the manual.[2] Good Deal Games started selling the regular edition in August 2002, which came with a plastic box, game cartridge and manual.[2][5]

After VecSports Boxing Pärssinen wanted to continue creating sports games and in August 2002 he started implementing his idea of a bowling game.[6][11] Unfinished VecSports Kingpin allows for four players to play the game, which is unusual for Vectrex. In March 2003 Pärssinen published a demo of his new mini golf game. Containing just one course, Nonagalf’s best feature is the music playing on the background.

Pärssinen published his unfinished and incomplete games on his site Manu’s Incomplete Games Volume 1-5 in March 2004.[6] Boulder Escape Terror Hazard (B.E.T.H.) is about avoiding bumping into the force fields (edges) by jumping from an asteroid to another. Yoehl is a basis for a simple roleplay, and in Ztagger the player shoots the right kind of enemies with the right kind of ammunition.

Collecting as a Hobby

Pärssinen started collecting old gaming hardware and software more or less actively in 1997 and seriously in 1999.[1] That same year he created a group called Pelikonepeijoonit together with Mikko Heinonen and Ville Heinonen, and they put together a website where they’d list their collection.[12]